If adaptation stimuli are applied properly, training can be expected to have accumulative effect. If motor activity is carried out in such a way that it evokes desirable current change of human functional activity, and consequently long-term, structural and psycho-social changes, it can be referred to as load.

Example : If I run every other night in the park without much planning and adherence to the principles of sports training, sooner or later pass the same track may be quicker, but also feeling more relaxed, which is a simplified functional change. Psychosocial changes in this case represent my daily effort and responsibility run out every night out.

The classification exercise as adaptation stimuli

From the point of view of manipulation with exercise load, it is necessary to identify the rate of specificity of exercise with each exercise, its intensity and volume.

Rate of specificity of exercise

Indicates how to what extent exercise is similar to the final design of sports activities. Specifity relates to the sequence of implementing certain muscle groups, the velocity of movements, the effort exerted, the duration of muscle tension, movement frequency, its direction and movement.

We distinguish between the following exercises:

Competition exercises are fully consistent with the design competition (e.g., an attack hit in volleyball). Special exercises assume higher, up to a high degree of compliance with the content and structure of sport specialization. They represent different parts and sub-variants of the final design and is used to improve athletic performance factors (physical, tactics), such variations attack hit in volleyball (e.g., attack after turning 360 degrees, after run back from the network after a landing). Generally nonspecific exercises are exercises which are not related to the given sports specialization. They aim at general development of athletes. The meaning of the exercises is versatile and indirect in respect to specialized perormance: (e.g. presupposition for development of reactive force for volleyball in gym, e.g. back squat).

Intensity exercise is characterized by a degree of effort. (There is a difference do 100 push-ups in 1 hour or 20 minutes). Exercise intensity is on te outside manifested as movement velocity, movement frequency, size of resistence being overcome; and it is related to the the way of performance energy coverage.

We distinguish the ways energy coverage:

The volume of exercise expresses the quantity of load. Volume can be epressed in time, i.e. duration of exercise or the number of repetitions of an exercise respectively. In training practice, the volume of load is expressed with general and specific training indicators.

The size of load is understood as a multi-dimensional magnitude which is created by load characteristics:

Crucial features for the volume of load are duration and intensity of exercise in the relationship of indirect proportion. (The higher the intensity, the smaller exercise volume.) Example: running the maximum intensity that will be achieved in terms of maximum speed we can keep the length of several tens of seconds. On the contrary, brisk walking, we are able to handle several hours walking trip.

Increase the size of the load can be in several ways:

Loading is a process of applying load which has been devined in advance repeatedly in time. The aim of loading is reaching cumulative training effect. Cumulative training effect arises form the phenomenon of supercompensation. Supercompensation is understood as increasing energy resources of the organism as a consequence of previous exercise load (defined by intensity and size). 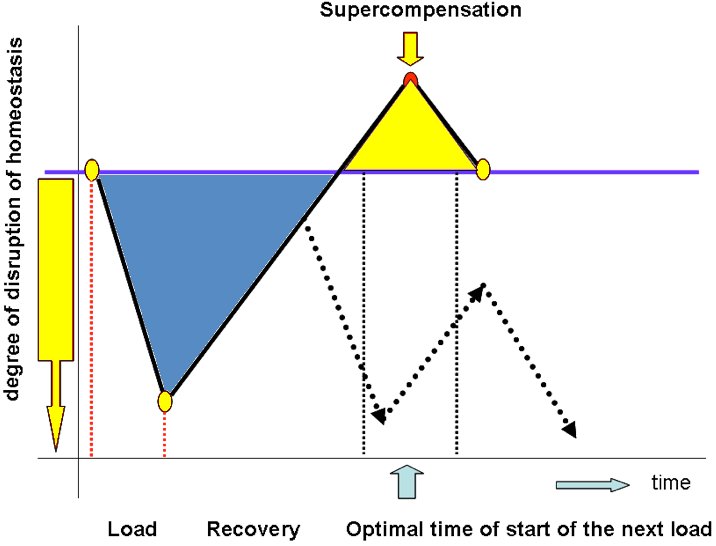 The emergence of supercompensation

Example: if an athlete runner goes throut training II zone intensity, he/she runs out of energy resources during training because of applied load. This phenomenon is manifested on the outside as fatique. Training is followed by rest during which recovery and repletion of energy resources before further training takes place. Energy resources repletion, however, does not stop at the previous level but there is an increase in energy resources. Subsequent load (further training) should ideally start right at the moment of supercompensation. Telling the moment of supercompensation is very difficult and it is influenced by a number of factors. At present, the optimum time for further load can be told by using a method of the variability of heart rate. If further load starts at the moment of supercompensation, cumulative training effect can be expected to appear. If further load starts too early when the athlete's organism has not been fully recovered yet, exhaustion is likely to appear. In a long-term perspective, this can lead to negative consequences of sports training, ....