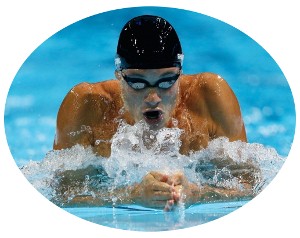 Adenosine triphosphate allows the transfer of energy from exergonic to endergonic reactions. Without an adequate supply of ATP, muscular activity and growth would not be possible. 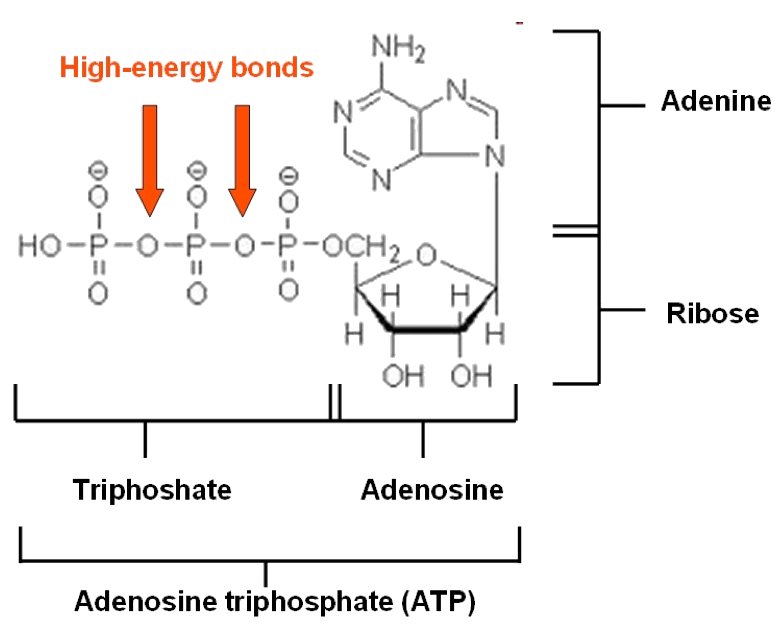 Adenosine triphosphate is composed of adenosine and three phosphate groups. Adenosine is the combination of adenine (a nitrogen base) and ribose (a five carbon sugar). The breakdown of one molecule of ATP to yield energy is known as hydrolysis, because it requires one molecule of water. The hydrolysis of ATP is catalyzed by presence of an enzyme called adenosinetriphosphatase (ATPase). This adduct is classified as a high energy molecule because it stores large amounts of energy in the chemical bonds of two terminal phosphate groups. Equation 1: hydrolysis of ATP.

We know two types of the metabolism (anaerobic and aerobic). Anaerobic processes do not require the presence of oxygen. The phosphagen system and first phase of glycolysis (fast glycolysis) are anaerobic mechanisms that occur in the sarcoplasm of a muscle cell. The Krebs cycle, electron transport, and the rest of the oxidative system (slow glycolysis, the oxidative system) are aerobic mechanism that occur in the mitochondria of muscle cells and require oxygen as the terminal electron receptor.

Phosphate system provides energy for a very short time at the beginning of motor activity through the hydrolysis of ATP resources and decomposition of CP (creatine phosphate).

Fast glycolysis uses carbohydrates as a substrate for creating ATP during high-intensity activities without the presence of oxygen. The final product of fast glycolysis is pyruvate which is furter converted to lactate.

Slow glycolysis uses carbohydrates as a substrate for creating ATP during medium- and low-intensity activities where pyruvate, the final product of glycolysis, is not converted to lactate but it is transported to mitochondria where they are subject to Krebs Cyclus. Slow glycolysis is conditioned by a sufficient amount of oxygen.

Oxidative system uses fats as a substrate for creating ATP during low-intensity activities where fats enter the Krebs Cycle directly provided there is a sufficient amount of oxygen.

Of the three main macronutriens (carbohydrates, proteins, and fats) only carbohydrates can be metabolized for energy without direct involvement of oxygen. Therefore, carbohydrates are critical during anaerobic metabolism. All tree energy systems are active at any given time. The magnitude of the contribution of each system to overall work performance is primarily dependent on the intensity of the activity and secondarily on duration. 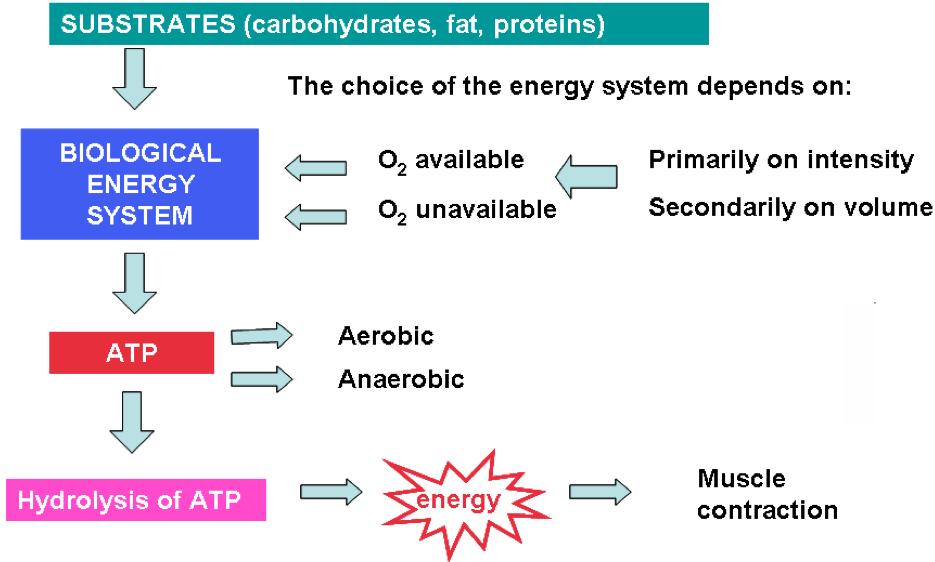 The phosphagen system provides ATP primarily for short-term, high-intensity activities (e.g., resistance training and sprinting) and is active at the start of all exercise regardless of intensity. This energy system relies on the hydrolysis of ATP and breakdown of another high-energy phosphate molecule called creatinephosphate (CP). Creatine kinase is the enzyme that catalyzed the synthesis of ATP from CP and ADP in the following reaction:

Creatine phosphate supplies a phosphate group that combines with ADP to replenish ATP. The creatine kinase reaction provides energy at a high rate. CP is stored in relatively small amounts; the phosphagen system cannot be the primary supplier of energy for continuous, long duration activities.

ATP in the body stores approximately 80 to 100g of any given time, which does not represent a significant energy reserve for exercise. The skeletal muscle concentration of CP is four to six times higher than ATP concentration. Therefore, the phosphagen system, through CP and the creatine kinase reaction, serves as an energy reserve for rapidly replenishing ATP. In addition, Type II (fast-twitch) muscle fibers contain higher concentrations of CP than Type I (slow-twitch) fibers.

This reaction is particularly important because AMP a product of the adenylate kinase (myokinase) reaction is a powerful stimulant of glykolysis.

Control of the Phoshagen System

The reactions of the phosphagen system are largely controlled by the law of mass action. The law of mass action states that the concentrations of reactants or product (or both) in solution will drive the direction of the reaction. For example, as ATP is hydrolyzed to yield energy necessary for exercise, there is a transient increase in ADP concentration in the sarcolemma. This will increase the rate of creatine kinase and adenyle kinase reactions to replenish the ATP supply.

Glycolysis is the breakdowns of carbohydrates-either glycogen stored in the muscle and in the liver or glucose delivered in the blood-to resynthesize ATP. The process of glycolysis involves multiple enzymatically catalyzed reaction. As a result, the ATP resynthesis rate during glycolysis is not as rapid as with phosphagen system; however, the capacity is much higher due to a larger supply of glycogen and glucose compared to CP. As with the phosphagen system occurs in the sarcoplasm.

Pyruvate is the end result of glycolysis, may proceed in one of two directions:

When pyruvate is converted into lactate, ATP resynthesis is slower and it depends on the intensity and duration of motor activity. This process is called anaerobic glycolysis (fast glycolysis). When pyruvate is transferred into mitochondria to enter the Krebs Cycle, the speed of ATP resynthesis is slower but it can last for longer time if the intensity of exercise is medium. This process is often referred to as aerobic glycolysis (slow glycolysis). While glycolysis itself does not depend on oxygen, using the terms anaerobic and aerobic glycolysis is probably not much useful to describe these processes. The need of energy depends primarily on the intensity of motor activity. If energy needs to be used quickly, for instance during heavy training, pyruvate is primarily converted into lactate. If there is not such an urgent need of energy and oxygen is present in the cell in a sufficient amount, pyruvate can be further oxidated in mitochondria like for example in endurance training.

The formation of Lactate

Blood lactate concentration reflects lactate production and clearance. Lactate can be cleared by oxidation within the muscle fiber in which it was produced, or it can be transported in the blood to other muscle fibers to be oxidized. Lactate can also be transported in blood to the liver, where it is converted to glucose. This process is referred to as the Cori cycle.

Recent evidence suggests that there are specific break points in the lactate accumulation curve as exercise intensity increases. The exercise intensity or relative intensity at which blood lactate begins an abrupt increase above the baseline concentration has been termed the lactate threshold (LT). The LT represents an increasing reliance on anaerobic mechanisms. The LT corresponds well with the ventilatory threshold (breaking point in the relationship between ventilation and VO2) and is often used as a marker of the anaerobic threshold.

The LT typically begins at 50% to 60% of maximal oxygen uptake in untrained individuals and at 70% to 80% in trained athletes. The stated values are only informative due to big inter-individual differences among individual athletes. In practice as a rule, there is bigger increase in lactate at concentration between 2 and 8 mmol/L of blood. This concentration range is referred to as Maximal lacatate steady state (MLSS). Within the range of MLSS, the creation and utilization of lactate during motor activity is balanced.

The oxidative system, the primary source of ATP at rest and during low-intensity activities, uses primarily carbohydrates and fats as substrates. Following the onset of activity, as the intensity of exercise increases, there is a shift in substrate preference from fats to carbohydrates. During aerobic exercise of high-intensity, energy is mostly gained from carbohydrates, provided there is enough of them.

The oxidative metabolism of blood glucose and muscle glycogen begins with glycolysis. If oxygen is present in sufficient quantities, the end product of glycolysis, pyruvate, is not converted to lactate but is transported to the mitochondria, where it is taken up, enters the Krebs cycle (slow glycolysis) and subsequently it gets to electron trasport chain (ETC) in order to create ATP from ADP. The production of ATP during this process is referred to as oxidative phosphorylation.

Oxidative energy system can use fats as a source of energy. Triglycerides stored in fat cells can be broken down by an enzyme sensitive lipase. This releases free fatty acids from the fat cells into the blood where they circulate and enter muscle fibres, enter the Krebs Cycle directly and subsequently the electron transport chaing (ETC) in order to create ATP from ADP. Creating ATP in this way is also called oxidative phosphorylation. 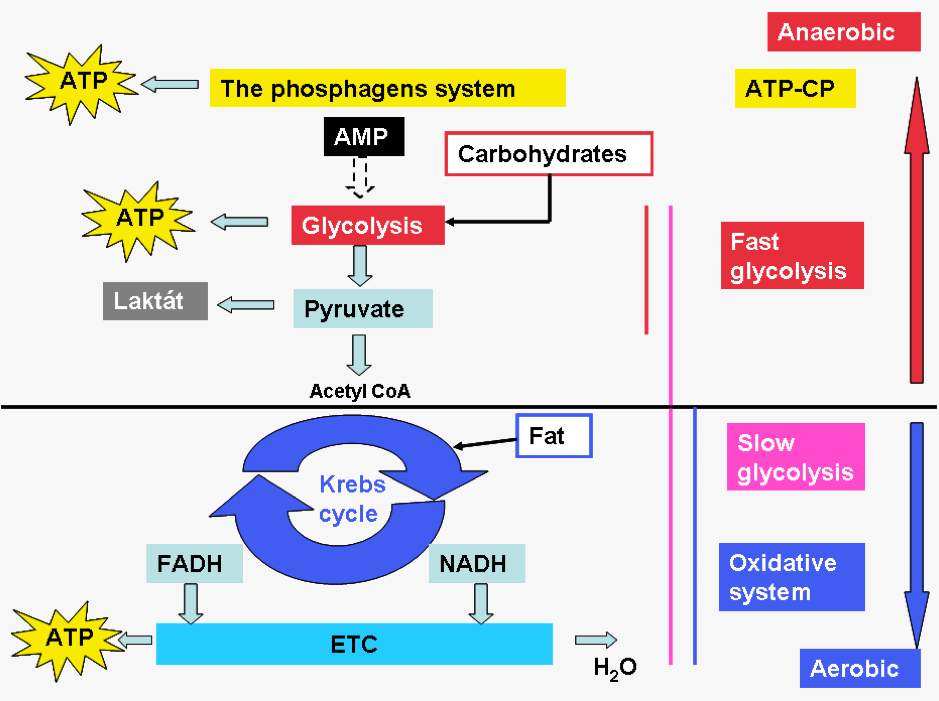 Total energy gained from oxidation of one glucose molecule is approximately 40 ATP. Glykolysis consumes either 2 ATP (if it start with blood glucose) or 1ATP (if it starts with glycogen), so net creation of ATP is 40 – 2 = 38, or 40 – 1 = 39 respectively. Total enerfy gained from oxidation of one (18-carbon) triglyceride molecule is 463 ATP. Other triglycerides which contain different number of carbons, produce more or less ATP.

The extend to which each of the three energy system contributes to ATP production depends primarily on the intensity of muscular activity and secondarily on duration. At no time, during either exercise or rest does any single energy system provide the complete supply of energy.

Table 2 Rankings of Rate and Capacity of ATP Production

Postexercise phosphagen repletion can occur in relatively short period. Complete resynthesis of ATP appears to occurs within 3 to 5 minutes, and complete creatine phosphate reshynthesis can occur within 8 minutes.

Limited stores of glycogen are available for exercise. Approximately 300 to 400g of glycogen are stored in the body’s total muscle and about 70 to 100g in the liver. Relatively constant blood glucose concentrations are maintained at very low exercise intensity (below 50% maximal oxygen uptake); as duration increases beyond 90 minutes, blood glucose concentrations fall, but rarely below 2.8 mmol/L. Long-term exercise (over 90minutes) at higher intensities (above 50% of maximal oxygen uptake) may result in substantially decreased blood glucose concentration. Hypoglycemic reactions may occur in some people with exercise-induced blood glucose values of less than 2.5 mmol/L. After finish of this exercises must be repletion carbohydrates. Repletion of glycogen (glycogen is compound from molecules glucose) during recovery is relates to postexercise carbohydrate ingestion. Repletion appears to be optimal if 0.7 to 3.0 g of carbohydrates per kg of body weight is ingested every 2 hours following exercise. Muscle glycogen may be completely replenish within 24 hours provided that sufficient carbohydrate is ingested.

Source of energy for a longer activity. In human body, there is a 5-20 kg store in hypodermic fat which, in theory, can last for an activity of unlimited duration.