New platform Is no chip off the old starting block

Olympic swimmers don't just dive into the pool like the rest of us. They start on a block called, appropriately enough, a starting block. London will see the Olympic debut of a track-style starting block with an inclined surface and a lip at the back.

The blocks, first used in international competition at the Swimming World Cup in 2009, let swimmers push off from a crouch with the rear leg at a 90-degree angle, optimizing the power of their launch. The block also can detect false starts.

Why does that even matter to a physicist? Because it's all about acceleration.

Let me start with a simplified case of a swimmer on a flat block, even if the old-style blocks weren't exactly flat. If the swimmer wants to dive off, he must push on the block to accelerate into a dive. Here is a diagram showing the swimmer and the forces on the swimmer during a start 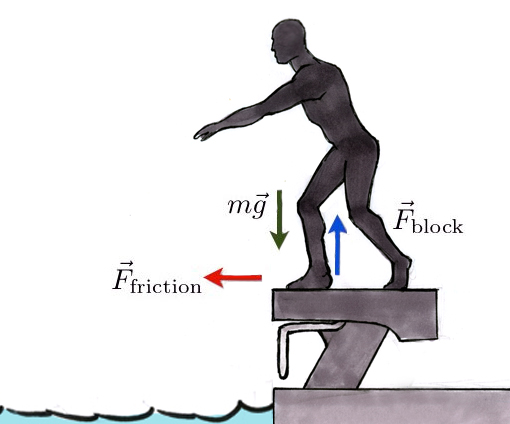 Yes, a swimmer typically grabs the block with his hands during a start. I will get to that in a moment. For now, let's consider this simple version. There are three forces on a swimmer: the gravitational force, the force of the block pushing up and the friction forward pushing in the direction of the acceleration. Remember, these are forces on the swimmer, not forces the swimmer exerts on the block.

Let me assume that during this starting motion, the swimmer only accelerates horizontally with no jumping up. In this case, the sum of the forces in the vertical direction (which I will call the y-direction) must add up to the zero vector. The basic principle of force says forces change the motion of an object. Since the vertical motion doesn't change (stays at rest) the net force must be zero.

This can be written:

Where μs is the coefficient of friction. It is a value that depends upon the two types of materials interacting via friction (in this case, a human foot and a slightly abrasive material on the surface of the block). The harder the two surfaces are pushed together (Fblock) the greater the maximum value of the frictional force. What about the "less than or equal to" sign in the equation? That simply means this is the frictional force that tries to prevent the two surfaces from sliding. It will push only has hard as necessary (up to a point) to prevent sliding.

So, in the horizontal direction the only force is friction.

So the maximum horizontal acceleration just depends on the coefficient of friction. For now, I will estimate a friction coefficient of about 0.8, but it doesn't really matter what it is.

So what happens if there is a wedge at the back of the block? Again, let me simplify the situation just to show the difference. Let me assume the whole block is tilted at an angle θ above the horizontal. That will just change the force diagram like this: 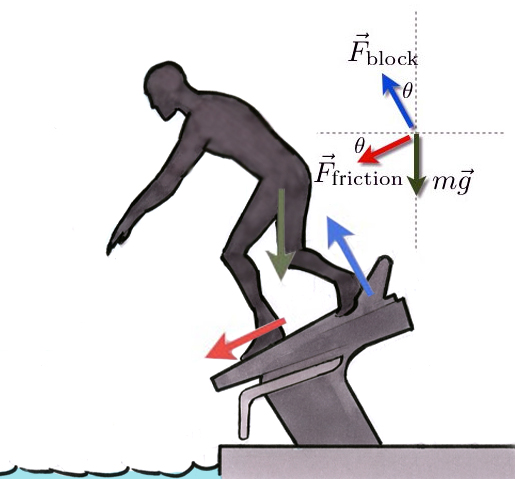 I drew the forces twice so it's easier to see how they add up. In this case, there are two forces that can accelerate the swimmer in the horizontal direction — both the frictional force and the force from the block. If I write the net force in both the x- and y-directions, I get:

Here, the negative signs for the x-forces are there just because I drew the swimmer accelerating to the left. Now I will use the same model for the frictional force to solve for the acceleration in the x-direction.

I know this looks crazy, so let's check a couple of things. First, does it have units of acceleration? Yes. Both of the trig functions have no units and neither does the coefficient of friction – that just leaves the acceleration with the same units as g. Second, what about the case where θ = 0? This should give the same result as before (since it is the same case). The tangent of zero (degrees or radians, it doesn't matter) is zero. So, yes, it gives the same result.

It isn't so easy to see how this acceleration changes with higher wedge angles. Let me plot the maximum acceleration for angles up to 30 degrees. 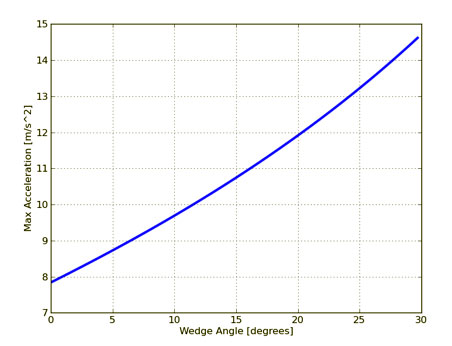 You can see it allows for a greater acceleration off the starting block. Of course, this is just a model since in reality the swimmer only has one foot on the wedge and one on the normal block. Hopefully, you get the idea.

What About the Hands?