Paddlers are more efficient than propellers

Recreational swimmers don't think too much about the precise arm motion that maximizes efficiency and power. Most are simply trying to stay afloat and moving. But elite freestyle swimmers like Kara Lynn Joyce or Michael Phelps have long pondered the ideal technique. Some use what's called deep catch, pulling their arms through the water like a paddle. Others use sculling, which involves swinging the arms to the side like a propeller.

Both are used by Olympic-level swimmers, but a research team at Johns Hopkins University has crunched the numbers and says the deep catch has the edge. It produces more thrust, said Rajat Mittal, a fluid dynamics expert, mechanical engineer and professor at Johns Hopkins' Whiting School of Engineering. Sculling is about 20 percent less efficient, an astronomical difference in an event where fractions of a second matter.

"While the fact that the deep catch is more effective than sculling might not have been a complete surprise," said Mittal, "the surprise was that first, sculling does not really do what it is supposed to do, which is to produce more lift-based thrust, and second, that the deep catch actually generated a majority of its thrust from lift and not drag."

With deep catch, the swimmer's arm goes deep into the water with the elbows straight and palms perpendicular to the swimming motion, pulling the arm straight back to exert as much force, or thrust, as possible. It requires a tremendous amount of strength and energy, and often is used in conjunction with other strokes on long events.

Sculling raises the elbow so the arm moves inward and outward in an S-shaped, propeller-like pattern, starting at shoulder width and moving toward the center and back out, with the elbow bent throughout the stoke. It was developed in the 1960s by James "Doc" Counsilman, the swimming coach at Indiana University. He argued that the lift force it generated was more effective at producing thrust than the drag force employed by deep catch.

Sculling grew in popularity in the early 1970s, reaching its peak during the late 1990s. Since then, however, the drag oriented, paddle motion has become preferred among coaches and swimmers. Still, Mittal and his team were curious to know which is better purely in terms of hydrodynamics. Mittal and his team have worked with USA Swimming since 2003 to better understand the hydrodynamics of the sport.

They started with laser scans and underwater videos, provided by USA Swimming, of top swimmers using both techniques. They then used animation software to model what they saw in the videos. Computational fluid dynamics allowed researchers to simulate the flow of water around the body, creating accurate models of the two types of arm-pulls. They then used the models to determine the effectiveness of each style.

"Our simulations predict the forces generated by the arm, and we compare these forces to determine the effectiveness of each style," said Mittal, "but each simulation requires thousands of hours of computer processing time."

In the end, deep catch was indeed more efficient. But then, many coaches and swimmers already knew that.

"In world class swimming today, there's more drag dominated swimmers in all strokes," said Guy Edson, director of clinics for the American Swimming Coaches Association. He's been teaching and coaching since the 1970s. "In the Olympic trials which just ended, if you're looking at the swimmers underwater, you just don't see a lot of lift force (sculling) being used by anybody now."

That said, Edson said this is not as straightforward as it might seem. The best technique is not necessarily derived from scientific analysis because every swimmer "feels" the water differently. Some swimmers who use sculling use it very well.

"Olympians are Olympians for reasons that go beyond the technical," said Edson, who concedes that he generally teaches the deep catch method. "Kara Lynn Joyce swims notoriously wide, with her hands outside of her body, but she's effective. She's got a beautiful early vertical forearm, it's really fantastic and she's pushing straight back, but right at the end she has a little bit of scull inward. You don't want to take that away from her." 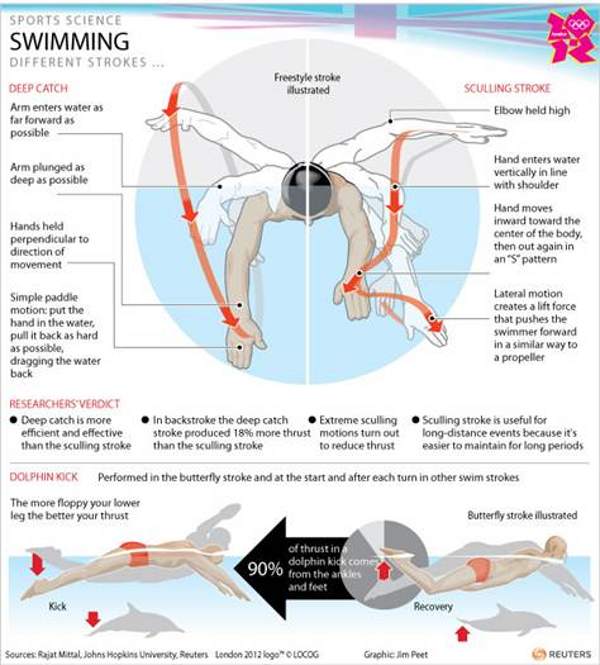 Tweet
Plus dans cette catégorie : « New platform Is no chip off the old starting block Why high-intensity training is more productive for swimmers than high-volume training »
Retour en haut