Although super-high training volumes are the rule rather than the exception for swimmers, there' s solid evidence that these heavy loads may be counter-productive. 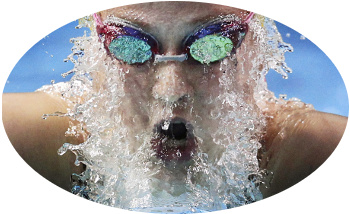 Swimmers train far, far too much. Incredible as it seems, many competitive swimmers scull through 10,000 metres of water per day, spending as much as three hours in the pool. Runners with comparable training programmes would need to cover almost a marathon each day, a schedule that would produce loud cries of derision - or the suspicion that certain record-breaking Chinese females were nearby. Yet, strangely, swimmers treat such training as the done thing.

Although super-high training volumes are the rule rather than the exception for swimmers, there' s solid evidence that these heavy loads may be counter-productive. A few years ago, the celebrated exercise physiologist David Costill determined at his laboratory at Ball State University that competitive swimmers who cut their training loads from 10000m to 5-6000m per day for a month or two do not lose fitness; in fact, they often IMPROVE their performances. Other investigations in Costill's laboratory have shown convincingly that just 10 days of 110000m per day training actually DECREASES muscle power in swimmers' arms, leading to slower race times.

But swimmers are a tradition-bound lot, so training philosophies aren't likely to change soon. Fortunately, though, there is a way for swimmers to rescue themselves from their high-volume training torture and to perform at peak levels during their most important competitions. What they need to do is taper - reduce their training - for an extended period of time before major races. A period of diminished training allows arm and legs muscles to recover - and then increase - their basic power, helping swimmers to move through the water like torpedoes rather than tortoises.

But what form should the tapering take? Although there are an almost infinite number of different tapering programmes, recent research at East Carolina University in the US provides definite clues about the optimal tapering plan. At East Carolina, exercise physiologists studied 12 male intercollegiate swimmers who were routinely swimming 60,000 metres a week.

These swimmers tapered for 10 to 14 days, cutting training volume by 60-75 per cent (from 60,000 to 20-24,000m a week), and clipping daily swim volume by 45-100 per cent. The relative amount of interval training also declined during the taper, reaching a nadir of 40 per cent of the daily quantity of training compared to the usual 70 per cent. Actual interval training consisted of 25-lOOOm repetitions at 100-130 per cent of race pace. At the end of the tapering period, some of the swimmers also shaved off all their body hair in order to gauge the separate benefits of tapering and shaving.

As it turned out, tapering and/or shaving had no significant impact on oxygen consumption or lactate production during fairly intense swimming efforts, but tapering did boost muscular power by a full 5 per cent and led to 3 per cent faster race times at the season-ending competition. Tapering might bolster raw muscle power either by increasing muscle-cell recruitment (the number of muscle cells which contract simultaneously during a stroke) or by increasing the speed, with which muscle cells contract; the latter effect is more likely. Research carried out by Dave Costill, himself a top-class vet swimmer, has shown that the contraction velocities of fast-twitch muscle fibres decline during high-volume training but then rebound to extra-high levels after a tapering period.

Shaving off body hair didn't make muscle cells contract more powerfully but it did increase the distance travelled per stroke by a nifty 5 per cent, probably because shaving decreases the 'drag' on a swimmer's body. In the Caroline study, shaved swimmers travelled about four inches further with each stroke than they did when they were hairy.

A 3 per cent speed-up in performance is pretty good, so you might think that the East Carolina researchers have found just the right tapering formula (ie, a 60- to 70-per cent reduction in volume, a 50-per cent decrease in workout frequency, and a small cutback in the relative proportion of interval training over the course of about 14 days). Indeed, other research with swimmers tends to generally support the Carolina findings. A classic study by Dave Costill (again!) showed that a 60-per cent cutback in training over a two-week period raised swimmers' muscle power by almost 25 per cent. However, a separate piece of research by Japanese scientists has suggested that the optimal tapering plan might involve cutting back total volume by 80 per cent during a one-week time frame. This scheme raised blood-haemoglobin concentrations by about 7 per cent, increasing oxygen delivery to the muscles.

On the other hand, recent research with runners suggests that the best-possible tapering regime might be quite unusual - and far different from the normal tapering programmes used by swimmers. In runners, a 90-per cent cutback in training mileage and an almost total reliance on race-pace intervals during a tapering week has produced dramatic improvements in SK performances. This off-beat protocol maximises rest and recovery - since only 10 per cent of an athlete's usual miles are completed during the taper - and also provides tremendous neuromuscular preparation for the specific task of exercising at race pace, since almost all the mileage is carried out at actual race intensity. It's possible that such a taper - a small number of daily intervals completed at race pace over a one-week period - would also be optimal for swimmers, but this has yet to be tested.

We do know that swimmers shouldn't cut their workout frequency by more than 50 per cent during a tapering period since such cutbacks have been linked with a loss of 'feel' for the water, and 7-14 per cent downturns in muscle power. Swimming is a 'skill sport' with complex stroke techniques, and it's possible that swimmers' nervous systems simply 'forget' how to coordinate rapid, forceful movements through the water when workout frequencies are too low.

Although most swimmers worry about reducing their training volume too much during a tapering period, the reality is that it's very hard to over-do tapering. Research has shown repeatedly that swimmers can trim their weekly training volume by 70-90 per cent for up to 21 days without losing any performance capability at all.

The ultimate goal of tapering is to blend reduced training distance with the appropriate workout frequency and swimming speed in order to produce the fastest possible swim times. We know that the optimal reduction in training distance is probably about 80-90 per cent and that the optimal training period is around 14 days. If scientists can find just the right intensity and frequency of training for tapering periods, swimmers will be ready to set some exciting new PBs.

Tweet
Plus dans cette catégorie : « Why high-intensity training is more productive for swimmers than high-volume training The basics of technique for all strokes and specific training needs »
Retour en haut