Males tend to swim faster than females. Women have higher percentage of body fat than men, whereas men have more muscle weight. This results in women floating better and showing a greater swimming economy, 30 % lower energy cost than men have been reported (McArdle, Katch and Katch 1996).

Swimming power and especially upper body strength have been demonstrated to be crucial to success in sprint swimming. 86% of one's performance in a 25-m front crawl sprint result from the swimmers' strength and the ability to develop power. For the competitive distance swimmer the strength component is less. At 100, 200, and 400m, the contribution of muscular strength drops to 74, 72 and 58%, respectively. During slow, low-intensity swimming most of the muscle force is generated by slow twitch fibers. As the muscle tension requirements increase, the fast twitch fibers are incorporated. In sprint events (50-200m) demanding maximal strength, the second group of fast twitch fibers sets in. The tendency is that swimmers have higher percentage of slow twitch muscle fibers in their shoulders and particularly musculus deltoideus. However, muscle fiber composition appears not to be a deciding factor in successful competition. Swimming is performed almost totally with concentric contractions (Costill, Maglischo and Richardson 1992).

Dynamic strength is an important determinant of swimming performance. Studies have found that upper-body muscular strength and/or power output correlate highly with swim velocity over distances ranging from 23 to 400m. Also, swim and swim-specific resistance training (e.g. bio-kinetic swim bench training, reverse current hydrochannel swimming and in-water devices that the athlete push off from while swimming) improves a competitive swimmer's velocity in events up to 200m. This training can result in improved stroke mechanics, such as stroke force and distance per stroke. Research tends to conclude that stroke mechanics may be more important in determining velocity and swim success than upper body strength (Tanaka and Swensen 1998).

The amount of energy required to swim is related to the intensity and strokes used. The demand for energy is reduced proportionally with the skill of the swimmer. Traditionally, monitoring the oxygen consumption during sub-maximal swimming, at speeds below those in competition has been the measure for energy use. However, swimming performance seems to be more dependent on the skill of the athlete than the VO2 max. values (Costill, Maglischo and Richardson 1992). Swimming fast is a matter of increasing propulsion while reducing the resistance of water to forward movement.

In swimming, energy is consumed both to maintain buoyancy, to generate horizontal movement through the use of arms and legs and to overcome drag forces in the water. The speed, size and shape of the swimmer and the fluid medium result in the degree of drag. The total drag force that the swimmer must encounter consists of wave, skin friction and viscous pressure drag. In comparison to running, swimmers have to use four times as much energy covering the same distance. In order to reduce the body drag, optimal technique especially of the arms is essential, and the use of wet suits have been introduced and show to decrease the body drag by 14%.

"Elite swimmers can swim a particular stroke at a given velocity with lower oxygen uptake than relatively untrained or recreational swimmers." That is, skilled swimmers use more of the energy produced per stroke to overcome drag forces. And secondly, they cover a greater distance per stroke than untrained, who use energy to move water (McArdle, Katch and Katch 1996).

The ability of the body to support oxygen to the working muscles and to extract waste products which are transported with the bloodstream, to the airways is defined as aerobic endurance. Traditionally the Maximal Oxygen Uptake Test (VO2 max) described by Sinning in 1975, has been applied to measure aerobic capacity (McLatchie 1993).

This is the ability of the muscle to rely on anaerobic metabolism at any given points of sub-maximal intensity of exercise. Lactic acid is the end product, and muscle fatigue will occur if it is not removed (McLatchie 1993). A study by Kesinen et al (1989) looked at different modes of lactate tests. They investigated swimming velocity, and blood lactate and heart rate responses with varying durations in separate swimming loads, and found that the most accurately evaluation of anaerobic capacity was using 2 × 100m or n × 100m modes (Keskinen, Komi and Rusko 1989).

Anaerobic endurance is the ability to maintain high levels of work intensity (McLatchie 1993). The Anaerobic Threshold is the highest work intensity beyond which lactate begins to accumulate in the blood. The metabolic acidosis occuring above anaerobic threshold contribute to limitation in performance (Cellini, Vitiello, Ziglio, Martinelli, Ballarin and Concorni 1986). The aerobic training zone is differentiated into low-intensity and moderate-intensity efforts. This zone extends until the rate of lactate production exceeds the rate of removal, where the rate of lactate accumulation rises over the baseline, is termed the aerobic threshold. Once the threshold is crossed, the swimmer will not be in steady-state and cannot continue swimming at this pace for an extended period of time. At this stage hypo-aerobic fibers will dominate compared to hyper-aerobic fibers. Training over the aerobic threshold will affect the muscles ability to tolerate or buffer acid, and to remove lactate from the intra-cellular environment (Australian Swimming Inc. 1996). 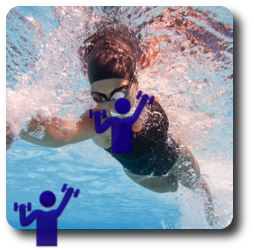