The championship season is all about competitive per­formance rather than responses to training. Estimates of progression and variability of performance in com­petitions are useful for coaches, swimmers, and re­searchers interested in factors affecting performance (Hopkins et al. 1999; Trewin et al. 2004).

Progressions are generally required to ensure that a swimmer qual­ifies for the semifinal and then the final in a given event, and that peak performance is produced in the final, where medals are decided. Performance evalua­tions of this type for leading swimmers provide some insight into the variability and progression of perfor­mance of both individuals and teams (Stewart & Hop­kins 2000). This information also assists swimmers and coaches in the planning process.

Within each competition, both nations showed similar improvements of 1.2% in mean perfor­mance time from heats through finals. Mean compe­tition time improved in the 12 months between the Pan Pacifics and Olympics by approximately 0.9%. The typical variation in performance time for a swim­mer between races was 0.6% within a competition and 0.8% between competitions. Sex and swimming distance appeared to have minor or negligible ef­fects on progression and variability. These findings suggest that an Olympic swimmer has to improve per­formance by -1% within a competition to stay in con­tention for a medal and by -1% within the year lead­ing to the Olympics.

The variation in performance from race to race is an important determinant of a swimmer's chances of winning the race. A swimmer in contention for a medal has to improve his or her performance by ap­proximately half the typical race-to-race variation in performance (expressed as a standard deviation) to substantially increase their chance of success. How­ever, other swimmers may also improve their per­formance between competitions, so a given swim­mer will need to improve by an additional amount approximately equal to the mean progression of all the competitors to remain in contention. An exam­ple of progressions in performance time for the 2000 Olympic and 2001 and 2003 World Champion lan Thorpe (Australia) in the 400-m freestyle is shown in Fig  and Table 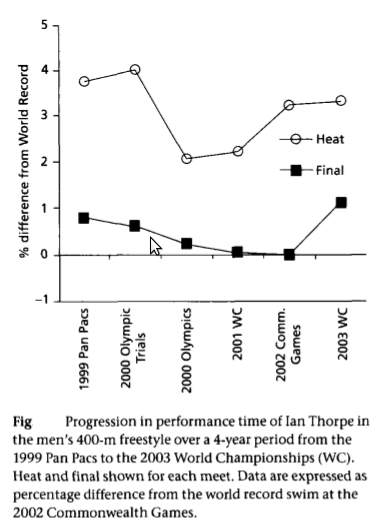 Fig Progression in performance time of lan Thorpe in the men's 400-m freestyle over a 4-year period from the 1999 Pan Pacs to the 2003 World Championships (WC). Heat and final shown for each meet. Data are expressed as percentage difference from the world record swim at the 2002 Commonwealth Games. 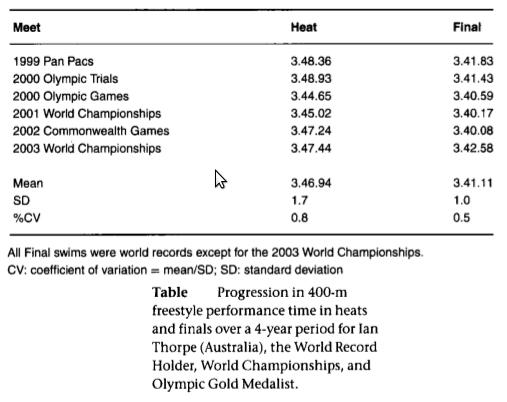